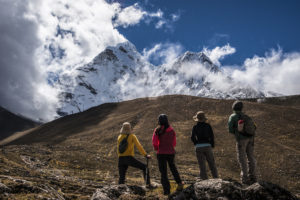 And so we begin…  Today marks the “official” birth of Sell and Thrive, a sales consulting company headquartered in beautiful tax-free New Hampshire. But in reality, Sell And Thrive was actually born on May 3rd, 1974 when I was just nine years old. That’s the day that my mother and father influenced me to get my first job, which as it turned out, was in sales. Unfortunately, the influence they used on me was in the form of being told that my father had dropped dead unexpectedly from a massive heart attack that very morning.

As they say, “necessity is the mother of invention”. My mother taught me this lesson not by repeating it, but by her actions on that terrible morning. You see, I was an only child, my father was a proud, old fashion Italian gentlemen who frowned on my mother working because he wanted to provide for his family. Regrettably, when he died he had nothing in the bank and no life insurance policy. So, at nine years old I got my first job selling newspapers and I have been working since then for the last 44 years.

Having a paper route was my initiation into the business world. I learned a lot and I learned quickly. I learned that sweat didn’t just come from playing sports or running around at school recess, it also came from having to peddle a bicycle laden with heavy newspapers overflowing from the baskets hanging over both front and rear tires. I also learned about the sales tactic known today as “The Free Trial”. You see, the newspaper company would always provide me with a few extra newspapers (by mistake) which I would usually throw away because I didn’t want to carry the extra weight on my bike. Then one morning I bumped into the neighbor of one of my existing customers. I offered him a free newspaper, and continued delivering it to him for a week at no charge. Then I abruptly stopped delivering it as I had tired of working for free. Several days later I was informed that the neighbor that had been receiving the free newspapers wanted to purchase a subscription. Well, as you can imagine, the bike ride home that day was, exceptionally pleasant… I had just planned and executed my first “land and expand deal” generated by a “free trial”. Not bad for a nine-year-old. And the rest, as they say, is history.

Let’s talk a little bit more about history. There is a phrase that say’s “if you don’t learn from history you are bound to repeat it.” At first glance this sounds rather ominous, sort of negative. But for me, I’m using this phrase as a positive, for it is the foundation for Sell And Thrive. What I mean, simply put, is that the value that Sell And Thrive delivers is the culmination of decades of real world and business experiences derived from the relationships I have had with former colleagues, customers, family, and friends. Sell and Thrive is a logical extension of everything I have learned over the course of my life, now re-applied in a new format that will help customers to Learn, Start, Grow, and Thrive.

But Sell and Thrive is far more than just another new business. Sell and Thrive is really an homage to all the sales reps I’ve worked side by side with in the trenches. Sales reps that taught me how to sell. Really, really, great sales reps like Dustin Baker, Scott Taylor, Lynne Boudreau, Ken Mills, Rick Hussey, Tim Richard, David Razzaboni, Kevin Moriarty, Matt Curtin, Ryan Coskren, Paul Fiore, Tom Stelten, and Mike Clark.

Sell And Thrive is also a derivative of the exceptional sales leadership skills that I learned while working for some of the most respected sales leaders in the industry. People like Andy Sykes, Greg Pavone, Jim Branch, David Vano, Michael Steinmetz, Seth Braverman, Todd Kaloudis, Robert Rivera and Nathan A. Treska.

The DNA of Sell And Thrive comes from the business savvy that I gleaned as a result of my interactions with subject matter experts and thought leaders such as Kelley-Sue LeBlanc, Dan McDuffie, Ned Williams, Carmen Scarpa, Kevin Poulsen, Stefanie Heiter, Dave Kranowitz, and of course my parents Carlo and Anne Ingemi.

Although the title of this Blog is “A New Company is Born“, created to announce the launch of Sell And Thrive, it’s really my way of publicly thanking everyone mentioned above ( and many, many more – you know who you are ) for teaching and mentoring me. Thanks to your guidance, incredible patience, and valuable IQ points this is really a Re-Birth. Please accept my most sincere “Thank You” to all of you that helped me get where I am today.

Pssst… We’re putting the band back together.

And so we begin…